For years the name Casio has found its place predominantly printed on the top of calculators in exam halls, but that’s not exactly the fondest of memories and now it seems like they’re looking to modernise that image a little bit with their newly released iPhone app Picapi Camera.
Picapi Camera reads and decodes multi coloured flashing lights in a manner similar to morse code, allowing the user to send or receive messages by simply pointing the camera of one phone at the screen of another.
Sadly for now the app can’t send anything more than a single 8-bit word, but fortunately you can circumvent this restriction by making that word a simplified URL which when identified prompts the phone to download further information from an online source. 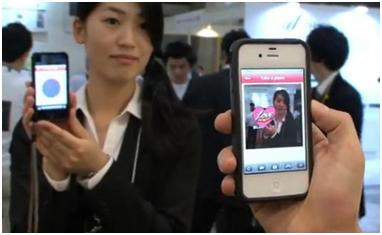 What could it be used for?
Casio are optimistic about the uses for their app, but it seems like other people are less so. The developers say that it could be used to share secret messages and in the long run be integrated into advertising tools such as billboards – where the lights would effectively replace QR codes because of their ability to work from considerably greater distances and connect to multiple devices at any given time.
Is this the future?
We all know QR codes are pretty terrible, and whilst Casio are hailing this Picapi Camera as the future of communication I remain less convinced.
They state that the app could be used to share secret messages and then go on to say that it would be good in advertising because multiple people can read the message at the same time – sounds to me like these cancel each other out.
What’s more, I can’t think of too many people who would be happy staring at flashing billboards everywhere they go – outside of Las Vegas it all just sounds a bit distracting and potentially dangerous.
The idea of embedding URLs into the lights sounds like it could raise questions too. It might be a good way to get around the character restriction but with smartphones getting more and more like your regular computer would this just open up a whole new method of getting people to download viruses onto their mobiles? Not everyone is tech savvy enough to know of the dangers of following and opening unknown links.
It’s an interesting idea and with some development it could go somewhere. QR codes need an updated alternative, but right now I don’t think this is it.

Rob writes for varifocal lenses experts Direct Sight.
If you would like to write for pcpedia then please submit your guest posts and i would be happy to publish it.